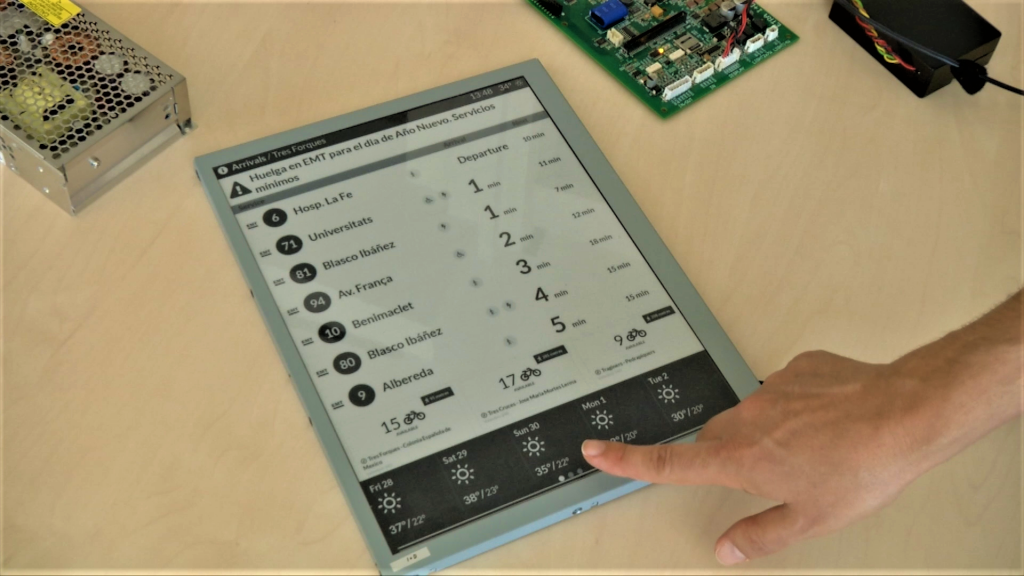 Real-time information about public transport is critical in allowing a responsible choice of a wide range of transport modes, thus reducing traffic congestion and carbon emissions in urban areas.

Eva Muñoz, project manager at ETRA Group, the company developing the technology, explains: “These digital panels reduce costs and environmental impact. The e-paper technology is energy efficient as it consumes power only when updating content, and not while displaying it. Therefore the devices can run only with solar energy. They are totally wireless and there is no need for digging or laying cables, thus reducing public works. These panels are energy-autonomous devices.”

The displays will be installed in the Cabanyal Valencian district, which is one of the European demonstration sites of the smart city project MAtchUP. Here the researchers are implementing an urban regeneration plan to make the building stock more energy efficient, to boost an intelligent less polluting mobility, and to improve ICT services for citizens.

The e-ink panels will be located in multimodal hubs, where various means of transport can be combined such as train, metro, bus and bike. During the next two years, peoples’ responses will be evaluated and the successful solutions possibly replicated in other cities.

The project’s consortium is also developing traffic prediction systems. The study is being carried out by the Polytechnic University of Valencia. Pau Arce, one of the researchers working on it, explains: “We use sensors to gather information on the transport choices made by citizens. We analyse them to generate mobility patterns, which are very useful for predicting journeys and preventing traffic jams. For example, we are working on a model to improve the bike-sharing service. With a smartphone app, people will be able to consult not only the real-time availability of bicycles at a station, but also forecast their presence at a specific date and time.”

These smart mobility initiatives fit the new measures announced by the Spanish government, which in 2020 declared a national climate emergency. The proposed legislation, to be approved by the parliament, is expected to include a reduction of net carbon emissions to zero by 2050. Spain aims to obtain up to 95% of its electricity from renewable sources by 2040, reported AP agency. And all this is in line with the new European Climate Law and the EU Green Deal, with which the Commission aims to make the European Union climate neutral by 2050.

Muñoz comments: “The European Green Deal launched by the European Commission on December 2019 highlights the fact that the green transition will be socially fair, leaving no one behind. People cannot be excluded. The next decade is expected to be a period of transformation for urban mobility, and the focus should also be kept on the user and not only on the vehicle. Several innovations are already emerging in this sector: platforms for sharing services, connected and automated transport, and new electric vehicles and so on. Technologies such as the Internet of Things (IoT) and blockchain will play a big role.”

Both Barcelona and Madrid are testing blockchain-based Mobility-as-a-Service (MaaS) platforms. The cities have dozens of mobility operators running in their urban areas, from public transport to private services such as taxis, from peer to peer sharing initiatives run by startups to solutions from multinational companies such as Uber. In this ‘mare magnum’ it’s not easy to select the very best option. Moreover, each service has its own app asking travellers to register and provide ID and payment information.

Being open-source, a blockchain mobility system can enable any mobility operator to join the network. So people using apps connected to this protocol can access a wide range of public and private services, and pay their fares using a single, integrated and secure digital system.

In Madrid one such smart mobility initiative is being led by the Municipal Transport Company (EMT). Ignacio Ramos, one of the developers of the Maas Madrid app says: “Our goal is multimodality, to attract and retain sustainable transport users. Multi-user shared mobility services represent an opportunity for the city, because this means fewer vehicles for more people. We also encourage the sharing of electric vehicles, not only because they are clean, but also because they promote the technology among potential buyers. Furthermore, as MaaS Madrid is a connected service, it allows us to collect data on transport user habits for analysis.”

Testing decentralised and more democratic transport platforms is a growing trend in smart cities to make urban mobility more efficient and to reduce the presence of polluting private cars.

Barcelona declared a climate emergency even before the general announcement by the Spanish government. According to the Municipality, mobility is responsible for 40% of greenhouse gas emissions by the city. Barcelona is implementing a Climate Plan, a package of over 240 measures engaging citizens to reduce greenhouse gas emissions by 45% (compared to 2005 levels) within 2030 and get carbon neutrality by 2050.

📅 26 – 27 January
📍 Online and in Koprivnica 🇭🇷
If you are interested in rural-urban mobility & would like to learn about the tools to develop long-term solutions, then @CIVITAS_EU regional city exchange workshop is the workshop for you!
Register here 👉 https://bit.ly/34D8FU8