Visit this page is Flamish

Ostend is the Flanders' leader of renewable energy: future model of resilience and sustainability.

Ostend, is a vibrant cosmopolitan city and municipality situated along the Belgian coastline in the Province of West-Flanders. With over five and half miles of sandy beaches, a royal history to look back on and an omnipresent first-rate seafood gastronomy, Ostend is often distinguished as the ‘Queen of sea-side resorts’.

It is located midway along the Belgian coast with an ever growing population of 72.000 inhabitants. On peak days, the population explodes to as much as 300.000 people.

The city is on the verge of transformation to become a more resilient, smart and sustainable future proof city. A lot of the current ongoing initiatives and future plans are related to this strategy.With the approval of the Covenant of Mayors and the local Energy Plan, the necessary measures and initiatives to reduce the local carbon footprint in policymaking are taken into account. With these commitments, the City of Ostend is a leader in Flanders in the field of sustainable and renewable energy.

Ostend in a glance: 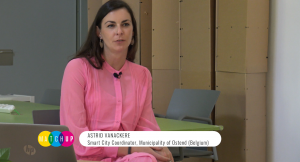 27 Jun 2022
The coastal city of Ostend, Belgium, is set to trial new technologies to improve the quality of services for its inhabitants, a population that triples in the tourist season

27 Jun 2022
The coastal city of Ostend, Belgium, is set to trial new technologies to improve the quality of services for its inhabitants, a population that triples in the tourist season